Pam Gets a New Kitchen > Remodel of kitchen

So after the 10 day wait, the counters were installed on March 17.  This is actually pretty quick.  Perk of doing things in the off season!

And are they beautiful!  They sparkle! 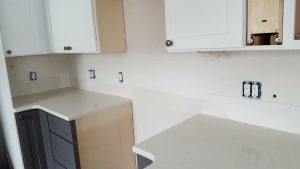 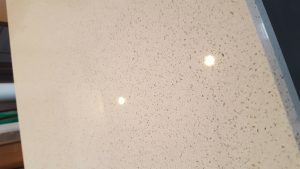 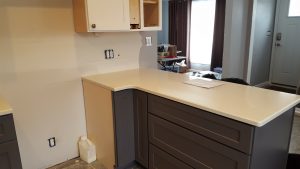 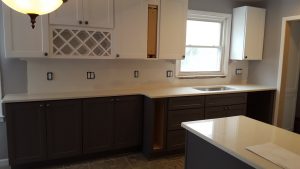 Then the next step was the backsplash.    This was my make or break item.  I knew I wanted it to be eye catching, but still neutral enough if we changed things up, it would still work.  And it is blue, in honor of my Mom’s favorite color.   We had to change the original choice of the tiles because we found out that the ceramic style was way over our budget.  (Darn Italian designers.) Then I discovered the glass tile came in these small mosaic ones.   Seeing this vision come to life has been incredible.  And it just pops like i hoped it would! 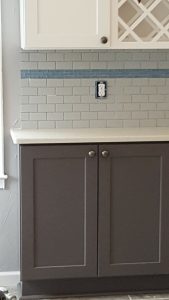 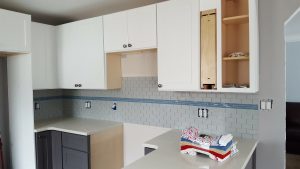 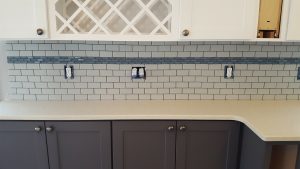 Will be posting more soon. 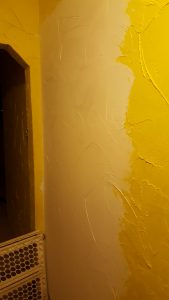 When this happened, you could really see how it is coming together and how it is starting to look like an actual room again.  The biggest thing that Tom and I notice is the former doorways being gone.  It is so strange to have them closed off and I know when we are using the house like normal I am going to walk into the wall once or twice (or 10 times.)

For example – the picture to the left – where there is white, used to be the door to the kitchen off the hall.  They were able to match up the texture pretty good, so we are glad about that.   The drywall guys were so fast.   Sanding took about 2 hours!

We also found out that there is no longer going to be any wall dividing the two rooms except for a small soffit between them.  The pictures don’t really do it justice,  I think once the paint is done, it will show better.

So for now, we can show pictures of walls and a sneak peak at our tile.  Grouting is tomorrow and then Wednesday – CUPBOARDS!!!

A lot has been going on, but it has been mainly behind the scenes type of stuff – like complete rewiring of the kitchen, a new circuit board, and the old pipes removed, but that doesn’t make for thrilling photos.   I thought I would take this time to note a little history of how we got here.

This house was actually bought by my husband Tom.  He bought it toward the end of his first marriage.  She only lived here a short time and though they picked it out together, this house has Tom all over it.   Just after we got engaged, he asked me if I wanted to get a house together, and we kind of looked around, but decided against it.  Thank GOD!!  It was the height of the housing bubble and we probably would have lost everything, so I am glad we didn’t.

The house is a story and a half bungalow built in the 40’s, walking distance from downtown Ferndale and across the street from a park.  All of this is in our plus column!   But, being a 70 year old house means lots of things need to be updated.  And we haven’t had it easy since we have been together from a financial point.  Tom was laid off 2 months after we were engaged, I came into our relationship with money issues due to my previous marriage.  Then I got laid off.  And then the worst part, my health started to decline.  Starting in 2006 I had ankle surgery that triggered an autoimmune disease – ankylosing spondylitis.   It took several years for me to be diagnosed and it is a story in itself.  But the short of it is, I have severe chronic arthritis in my major joints – specifically lower back, neck, shoulders, knees and yes…ankles.  It is very similar to rheumatoid arthritis (which must have a better PR team since everyone has heard of that and AS is more prevalent. ) but in the large joints.   With an autoimmune disease, comes fatigue, flu like symptoms, and all that jazz.     It just got to the point where working full time wasn’t an option anymore.   Hence, our budget got tighter.   Working on the house wasn’t something we could do unless it was an emergency.

Now, here is where my Mom comes in.   Tom and I both love to cook and entertain.   Due to us living close to both our parents, it just made sense for us to host the holidays, and then some.   Both our Moms would just love to come over and share in these big meals and watch us carry on the traditions they started (and our Dads certainly didn’t mind either.)  Every time we would host something, my Mom would say – oh I wish you would redo this kitchen.  You have no storage, you are always bumping into things, I hate to see you crawl on the floor to get out pots, why do you go downstairs for everything….and on and on.   I agreed wholeheartedly, but we just didn’t have the means to do it.  I would joke and say, “Are you going to pay for it?”    Then one day she looked me right in the eye and said, “Look — if after we both pass there is money left – you redo this kitchen.  And do it right. Hire a designer, make it work.  Promise me this.  Oh and fix that back room up too!”  I said I would, but the last thing I wanted to think about was losing both my parents, so it became something in the background.    Two months later, my Mom had a heart attack and after 11 days in ICU, she was gone.

So then I became my Dad’s caretaker.  First it was little things but then as he got older, he needed more help.  Drs apts, grocery shopping, someone to talk to, help him in the house.  Eventually we moved him to some senior apts and sold the house my parents lived in for over 50 years.  6 months after that, he was diagnosed with mesothelioma and then last August, after fighting tooth and nail to live, he too was gone.   He  made sure he said to me, if there is money left, fix your house.  It reminds me of the one I grew up in.   Make things easier for yourself now.   Don’t wait.

So here we are.  My parents, even though they aren’t here with me physically, are here helping me.  Making my life better.  I must thank them 100 times a day as we go through this process.  I am also trying to do things to honor them as I do it.  The name of the design firm is Whi

ski Kitchen.  Yes, spelled with ski.  My Mom’s Polish heritage along with Tom’s family’s made that an easy choice.  We are incorporating blue in the color of the back splash (my Mom’s favorite color), We are decorating our back room with Michigan items from our travels because of the love of  up north that both of them instilled in me.  I discovered the tile we picked was imported from Italy.  I had no idea until they dropped it off.  I smiled

and said Thanks Dad.  I hope that means he approves.

The design of this kitchen is also geared to make things easier.   No bottom cupboards – only drawers so less bending, much more storage, french door refrigerator with freezer on the bottom, quartz counters that are easier to clean.   Whiski really worked with us to put these items in place.  And now their sister company – Detroit Build – is doing all the work to make the vision come to life.

So that is how we have gotten here.   I hope my parents are looking down and smiling, and that they know what a gift they have given us.  I will continue to honor them by hosting holidays and other family events.  Every time I DON’T have to crawl on the floor to get a pot, I will look up and say Thank You.

I now understand what it means to live in a construction site.  Our kitchen is a skeleton.

To give you an idea of what we started with, I took a few “before” pics.

The demo started a couple of weeks ago.   The halfwall turned out to be something someone added at some point! 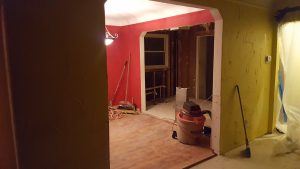 We also discovered the door along the hallway was a pocket door and the wall that made up the peninsula had been a full wall between the kitchen and dining room.  They said they found 6 layers of flooring in the kitchen.   We are now down to the floor boards. 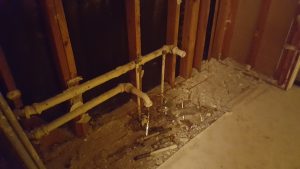 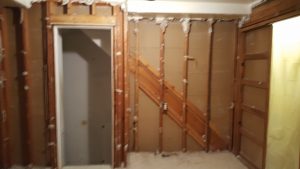 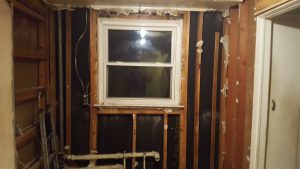 We have done it – the contract is signed, deposits are paid, we are redoing our kitchen.    I have put up with its non-storage for 12 years, and it is time.

My husband Tom had bought this house before we met.  He knew it needed work, but it is in a great neighborhood, across from a park and for the price, he couldn’t pass it up.   Because he had bought it with his ex-wife, he asked if I wanted to sell it and buy something new.   I thought about it and said No, we know the pains of this house, we could end up with something awful.   I am certainly glad I did, since it was at the height of the housing bubble and we would have been underwater on it in months.

But there are more reasons we kept the house.   First of all, it fulfills a want I have dreamed about as a child.  I always wanted to live within walking distance of a cool, fun downtown.  And I certainly couldn’t ask for more than Ferndale, MI has to offer.  It has a vibrate downtown with restaurants, bars, shops and lots of fun people who hang out here.   It is a very diverse and open community where people do watch out for each other.  Our neighbors on either side are helpful and friendly.  We even exchange Christmas gifts every year.  And we are across from a park…ie Doggie TV.

This house also has great character.  Built in the late 40’s it has plaster walls, hardwood floors, coved ceilings, oddly lots of windows and an upstairs big bedroom that also needs work, but that is another story.   The bathroom needs a gut job too, but hey, one thing at a time.

We always have wanted to redo the kitchen, but I didn’t want to do it partway.   Unfortunately we never had the money to do it all at once, and we have learned that doing things in pieces doesn’t work very well.  So we had to wait.   And now we are in a place to make this happen.

So soon, I will be a cook and foodie that has an awesome kitchen!